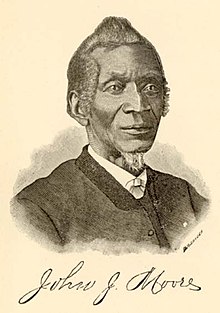 On September 20th 2019, Bishop John Jamison (J.J.) Moore of the AME Zion Church became Saint Benyamin the Moor through canonization in a surprise Benediction by his 8th generation grandson. Bishop Moore was the 15th consecrated Bishop of the church and the founder of the first AME Zion Church west of the Mississippi river (August 1st, 1852) in San Francisco, California. He was sent there on assignment having proved himself as a missionary of the church and as an itinerant preacher in Philadelphia County, Pennsylvania.

In the early 1800s the AME Zion church broke off from the Methodist Episcopal Church as a response to racist practices, and later became known as the “Freedom Church”. Its illustrious membership includes Frederick Douglass, Sojourner Truth, Harriet Tubman, and the Paul Robeson family.

Bishop Moore founded multiple churches in California and founded the “first negro school on Pacific coast”. After leaving San Francisco, Bishop Moore was raised to the dignified position of Bishop in 1868 and was responsible for territory in North Carolina areas. Bishop Moore was an integral figure in the early progress and development of the AME Zion Church. He documented the church’s history in ’The History of the AME Zion Church in America Founded in 1796 in the City of New York’, published in 1884 in the Library of Congress.

While ministering in San Francisco, Moore published a periodical called The Lunar Visitor. It promoted civil rights and advocated developing institutions for educational, social and political skills useful in working towards a full participation in American society

Bishop Moore is the patriarch of a dynasty of clerics that continued in spiritual work for eight generations and counting. The most well-known being Dr. Isaiah Henri Harrison Moore, a founder and Dean of the College of Scriptures in Kentucky.

H.A. Jabar Odokhan EL is a great grandson of Bishop Moore and was chosen by his elders to be the Custodian of the family library. Jabar inherits the custodianship from Peggy Slaughter of Louisville, Kentucky and Thelma M. Foster of Dayton, Ohio. H.A. Jabar is the Premier (Prime Minister) of the Zionst Temple of 1875 ordained by Bishop Moore in 1875 in Philadelphia County Pennsylvania for Orphans and Widows.

You can find out more about Bishop Moore’s legacy and his family at thezionchurch.org, thelunarvisitor.com, and moorzion.com.

The AME Zion Church has taken no official position on the surprise canonization. The denomination will be holding the 51st Quadrennial Session General Conference on July 29, 2021, in Atlanta, Georgia.